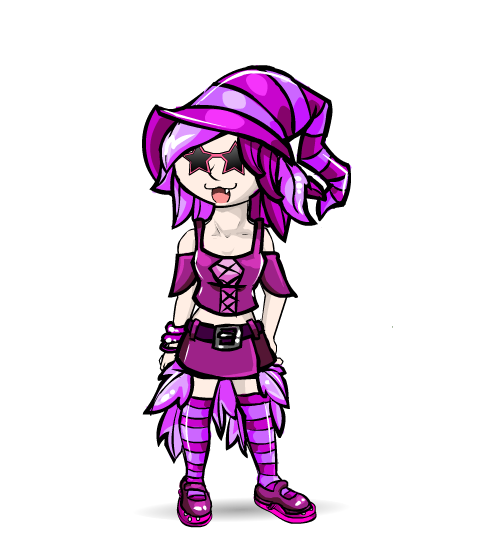 Yeah, my mums ill. Cancer. Shes not gonna die but I won't be on much.
Huggs to all the rule people.
[Especially Rizz :hugs:]

Everyone knows about my addiction to Gothi Huthiqs right? And I have been watching one called Atriariania for a very long time I decided to set up a blog following their progress. Please Tell Me If You Are In The Ownership Of One Of These Amazing Creatures!

goodaysunshine 23 Comments
Once Upon A Time...

...there lived a Eco Warrior named Sunni Plumpfkin, who could act very different when she was in different moods. As often as she could she would keep these extra moods stuffed in slightly lumpy places like behind toenails and in ears and other such places so they couldn't cause trouble and she almost forgot about them.
One day all these silly little emotions sort of crept out without Sunni realising and made her act a little moody, horrible, extra kind, hippy-ish and totally blissed out occasionally. Sunni didn't mind as she was quite quiet and there wasn't really many people that these moods could explode in front of. Then came the thoughts of the year of miserable-ness.
In this year Sunni, lost a best friend, gained a shadow that tied her to railings by her hair, got stressed out because of fairytale lessons *cough* exams *cough*, made a few lovely marafriends :squeezes hands: and got a cute pet grey squirrel called Plushea that bombarded her enemies with pine cones. Sunni realised that bad things where always going to happen and running away from them would do no good and neither would avoiding them. She decided that she must stand her ground and try talk people into stopping global warming and poverty. Into the midst of this trotted the Patchwok People. These people knew how to make Sunni happy and cheerful and occasionally squeeful. Sunni felt in debt to these people and made her first resoloution.
She would never completely leave them.
After a lot more thinking and cups of lemsips [Mental Note: Put anymore lemsips in front of Sunni again and she will hurl on you. =D] Sunni decided to make more resoloutions.
She would campaign against all the bad things humans where doing.
She would start a Karma notebook [You do a good deed, you write it down]
She would sort out christmas presents for everyone.
She would work harder on homework and geography projects.
She would only daydream of Maraworld when she had done two good deeds and then only for an hour *le gasp*
She would stop writing resoloutions 'cause her head hurts.
Love to every single fried friend that has made me a little happier, kicked my butt, sent me a random lemon gumball or a black doll, accepted my friends request or just plain where there whenever I had a cold.

Friends that deserve more than just that blather I just blogged up there:
Colgate Girl of the Frizzy Hair
Master Squishable
Harrietargh [No, really =P]
Sav the Chav
Fluffy wings and Halo girl
Monky-whos-face-is-not-as-evil-as-mine
Laffs with Taff
Box Sister/Ian Stalker/Demanding Blind
Bbeeeezzeerr
Chocolatewithnocolourbutwithalife
All the people whose club I ruined [Sorry Beanz]
Laureh
Thehannahwiththemodelface
Smurf
Thank you [Ty]
Sarah [Why so Serious?]

Luff you all for edar and edar.
~#I have quit, I keep my pets and items, I will occasionally come on for my friends and club [unless they throw me out]#~