Simeria
The Simerian Sundial is where time was first invented. The Mean Fairy realised that the light from the sun gave her all of her magical powers, and that she could tell what time of day it from the position of the sun in the sky. At midday, when the sun was at its highest, she had the strongest power. Ever since Ziranek was invented, everything went digital and Maradans forgot all about her and the Sundial she invented. She slipped into a depression and now takes out all of her anger by killing innocent pets.

You can sacrifice your pet to the Mean Fairy if you have a Mummy Doll that is the same species as your pet. She'll happily kill it and when shes done, she'll mummify your pet for you to stop it smelling so bad! When shes done, you'll have a Mummy Pet. It might just be a rumour, but if you are really, really, really lucky you may catch her in a good mood and she'll give you a Mean Fairy Doll too... 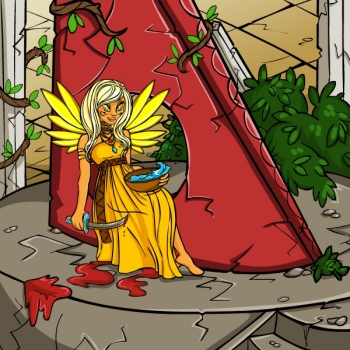 
You have no items in your Inventory